When I Was A 12-year-Old Jamaican Girl

A Case of Taken Identity 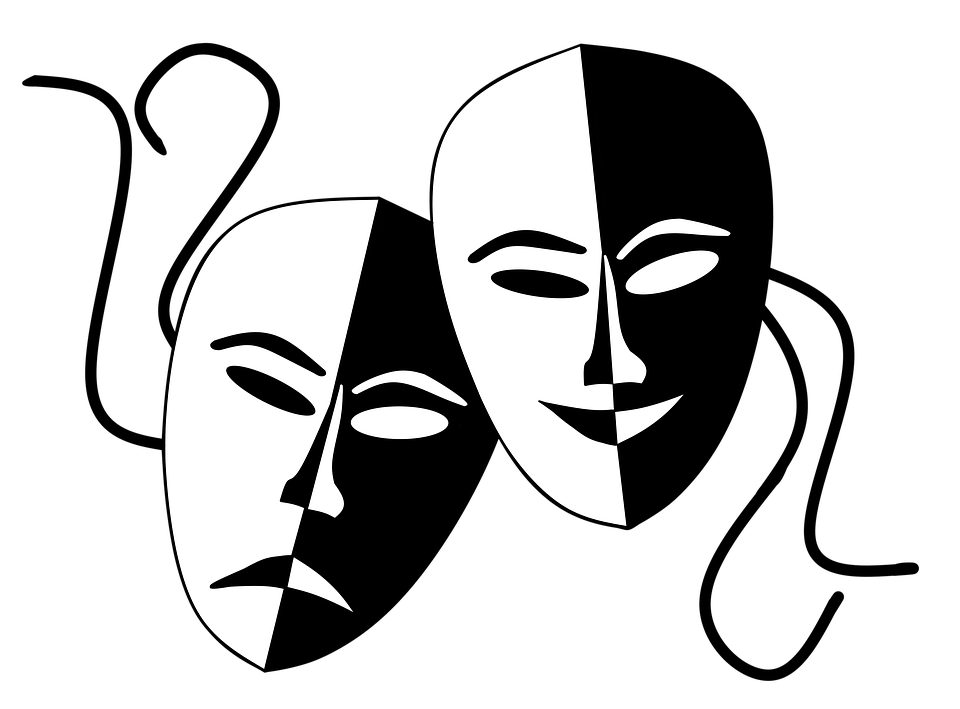 Used by permission from Conmongt via Pixabay.

Before I plunge into the madness that I like to call "the online voiceover casting world", I would like to state for the record that, to date, I have not yet seen the following casting specs:

Seeking middle-age Hispanic-white male with a goofy sense of humor, off the beaten path, with a portly tummy and a cheery disposition, a hangnail, a dog named Macy, who likes Superheroes yet has a wicked penchant for tomfoolery.  Prefer someone who had Chick-Fil A for lunch on Wednesday, with two sauce packets to go.

Such casting specs would be curiously specific, I grant you.

So for now, I have fallen back to arguing with people in the shower, where I will always win. *insert diabolical laughter here.*

Where I am going with this (I like to preserve an air of intrigue) is that sometimes I was unable to act these roles out because they were already so "me."  Consequently, I ended up searching for the more bizarre roles that would challenge me, and stretch my acting ability.  As memory serves, I saw the specs that said "12-year-old Jamaican girl" and said, "yep, that'll do it."

I have written previously about how we are voice actors.  It truly is all about acting, even in eLearning.  You may have the greatest Antonio Banderas voice in the world: one that can make me esswoon.  But unless I truly believe that you think that this particular vacuum cleaner is the undisputed best and here is how to assemble it properly, then you are going to suck, and not in a vacuumy sort of way.

Here, have this Ibuprofen for your headache.

Now, I confess that I lied, and you are cordially invited to subsequently label this blog as clickbait: I admit that I was never actually a 12-year-old Jamaican girl.  I deeply apologize for deceiving you, as deceit runs counter to what I believe in, and I had no business leading you down a primrose path under the auspices of intrigue.  Forgive me.

Memories…Of The Way I Wasn’t

I have admitted that early on in my career I was perusing several bizarre roles to see how I could stretch myself.  Honestly, there was a youth role offered with a Jamaican accent, female, 13 years old.  I thought, what the heck, I am irretrievably insane, let’s do this.  So I threw caution to the wind, stretched out my neck, raised my pitch and donned my best ever Caribbean accent (I actually do a pretty good one and have been booked a few times for it).  Now, was I booked for this particular role?  No. Because the world is more just than that, and there are authentic 13-year-old Jamaican voiceover girls out there that are much more deserving of such a role, because, well, they are 13-year-old Jamaicans.  Also because my Jamaican sounds faintly like a cross between a horse being impaled and Ethel Merman on crack cocaine.

Try as I may (and my wife would like me to stop please), I will never be a 13-year-old Jamaican girl, because -and there will be a quiz on this later- of three simple reasons:

Now, I may identify as a 13-year-old at times, and my wife will certainly attest that invariably I act like a 13-year-old when she does not let me go roller-skating on a school night, but the sad truth is that I am now nearly half-a-century old, and I receive AARP magazines in the mail.  You see, AARP is a magazine that the Illuminati sends you to tell you that you are now as old as sin itself, and are officially bereft of anything remotely resembling awesome. *checks off Bucket List #379: Use "bereft" in a sentence.*

I realize I may step on a few toes here, but welp - that is my job as a satirist.  These days, all sorts of people are identifying as all sorts of things.  For the record, I identify as a donkey, and my pronouns are He/Haw.  But doing so does not actually make me a donkey.  Identification is the act of relating to, or desiring the attributes of.  I would need to develop an appetite for salt licks were I actually a donkey.  No, AARP identifies me as boring, and so my pronouns are Ho/Hum.  And a) continuing my identity tirade as well as b) revisiting my portly physique, I am fat but prefer to still identify as skinny.  So I am effectively trans-slender.  B-dunk-tsshhh.

The simple fact of the matter is that there are scores of roles out there that I am capable of identifying as…but as Jeff Goldblum’s character Dr. Ian Malcolm posited to John Hammond in Jurassic Park, “Yeah, but your scientists were so preoccupied with whether or not they could that they didn’t stop to think if they should.”  *checks off Bucket List #380: Use "posited" in a sentence.*

So I ask you – do you pass up roles that you have no business doing?  Or do you try to do them simply because you are so preoccupied with whether or not that you could that you did not stop to think if you should?

Let me tell you a short story.  I was once cast as a British gnome talking in Spanish and singing Christmas carols.  The directed session made me want to harm small animals, as I recall.  "More British!" one side would yell.  "More Spanish!" the other side would retort.  "You're too flat!" some would chide.  "You're too sharp!" the others would admonish.  So...

"Bub-bye!!" I replied, and I hung up.  I am not making this up.  I never should have auditioned for it.  I am positive the next thing from the director would have been "More Donkey!"

I have played many things in my storied voiceover career.  I have been an old man, a wizard, a drunk, a wife beater, a Castillian, an alien, an animal, an African, a Caribbean, a hypochondriac, a transient, a paranoid delusional, a mom, Dr. Phil, a kid, a president, and Jesus Himself.  I can do all those, but I suck at being a British Spanish singing Christmas gnome.  Apparently my superhuman voice has its limitations.

Excuse Me, But Your Hubris Has A Hubris With A Hubris On It

Desperation drives us to delusions of grandeur.  Income and resumé pressure drive us to think we must tackle every single casting notice whether it is in our wheelhouse or not.  It is nothing short of hubris that makes us think we will be cast in such outlier roles.  Now, I am a huge believer in possibilities, but it is maturity that tells us to exercise discretion and invest our time and energy wisely.  I recently read a post from someone in a large Facebook community that said the following:

I do over 150 voices now with proficiency. I have had this gift ever since I was a kid, no training, no coaching, no vocal lessons. I can sing almost any man out there and even some women lol Every day I hear a voice over artist or narrator that I can completely clone their voice, literally fool their own families lol But yet clients would rather pay the high priced guy 3 times as much than just letting me do it. If I can clone the best voices an agent has on his roster, why wouldn't they just consolidate behind me???? If someone needs an example I'm glad to provide it. My range is all the way from Barry White to Elmo. I'm curious to hear anyone in the industry's thoughts cause to me it makes no sense.

Ultimately, I do not know this poster, and I cannot vet their experience.  But 150 voices with proficiency?  Fat chance.  I would rather be good at 5 things than just average at 150.  Such a post reeks of spring-chicken hubris, narcissism and lack of teachability.  I recently encountered another individual who posted a suggestion about booking work before you have a demo done. I countered it and suggested the reverse, and so this individual decided to say I was arguing and giving bad advice, stating “every coach I’ve taken would disagree with you on that.”  "Every coach." OK, bub.  It just got volatile from there, and I did not want it to get mean and hurtful, so I disabled comments and called Guido to break his kneecaps.

Ahh, Internet.  You who fuel anonymosity (“anonymous-animosity”: I just re-coined that; hands off!) and create bolder-behind-the-keyboard trolls in every dark corner.

I highly doubt his coaches would disagree.  Any reputable coach I have ever worked with or recommended would instruct one not to look for work until one has received training on how to bring said scripts to life, and one has a professional calling card produced (read: demo) that shows that one can do so.  Your self-made half-baked homemade demo is sure to land you in circular storage bins everywhere, and you will be remembered as "that guy with that crappy demo."

It is the same with auditioning for roles that we have no business auditioning for.  Why on earth would I want to be remembered as the overweight 50-year-old man who tried to impersonate a 13-year-old Jamaican girl?  I am fairly confident this would land me in a Dateline Chris Hansen sting operation.

We need to know our limitations.  Proceeding with such auditions is much like the ridiculous AITA Subreddit where people have to actually ask the entire planet if they did the right thing.  Don't you know???  It reeks of validation issues.  We should know when a role is not right for us.  I know I can pull off a convincing British accent, and have been cast many times for it.  I also can do a fun Australian accent, but not nearly as well: so that means that I should not try to narrate a half hour of content in Australian.  It also means that I cannot sustain it for that long in a directed session. Way too much pressure for me, thankyouverymuch.  Consequently, I avoid Australian reads just like I avoid barium enemas.  Look for this story to be revealed in a future blog.

When a producer goes to great lengths to put “NATIVE” or “AUTHENTIC” in caps, they mean it.  If they say “NATIVE UK SPEAKERS ONLY”, but you put on a simply dynamo British accent – sorry, yerrrrrrr outta there.  Granted, if you can do it and they say all accents welcome (even non-native imitations), then by all means go for it.  But for the love of Pete, exercise discretion and listen to what they are asking for.

Want help with your accents and choosing the right roles that truly represent you?  Talk to Nic Redman.  She is great!  In fact, I am registered for her next class, "How To Convincingly Pull Off A Scottish Klingon singing Baby Shark in patois Cantonese to Arabic Turtles", just as soon as I finish reading my AARP.

Now if you will excuse me, my wife is waiting for me to try arguing with her again so that she may annihilate me.

When A Voice Talent Is Rendered SpeechlessDecember 13, 2021
Maybe Depeche Mode had it right all along...May 10, 2021
There Can Be Only One…Voiceover ArtistJanuary 20, 2020
Welcome to Voiceover Manners 101February 3, 2020
Complete Voiceover Shopping List: Rocket Packs and Magnetic BootsJune 29, 2021