My Life as a Bird 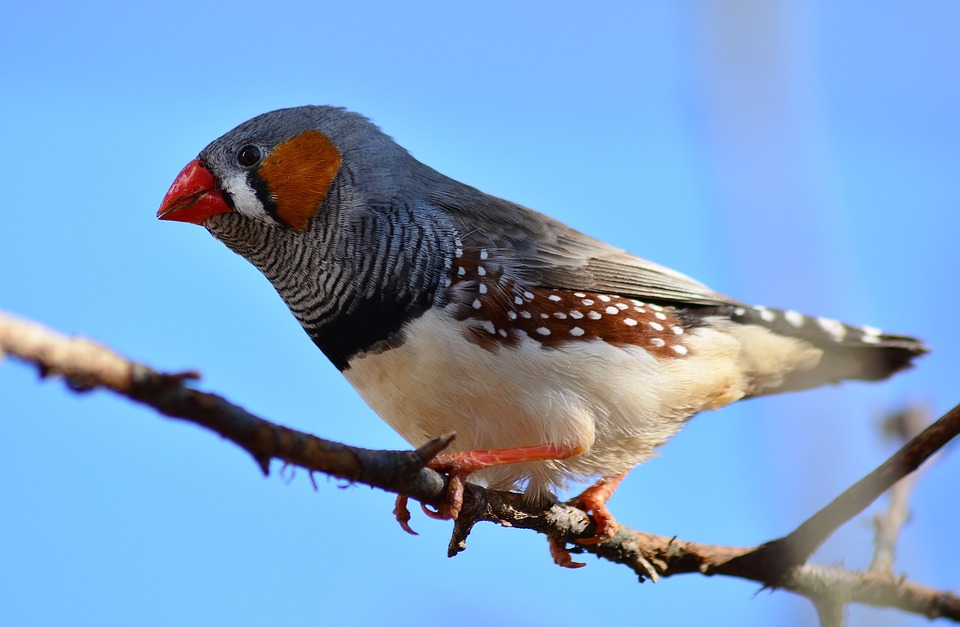 Used by permission from jggrz via Pixabay

Yet Another Riveting Blog about Death 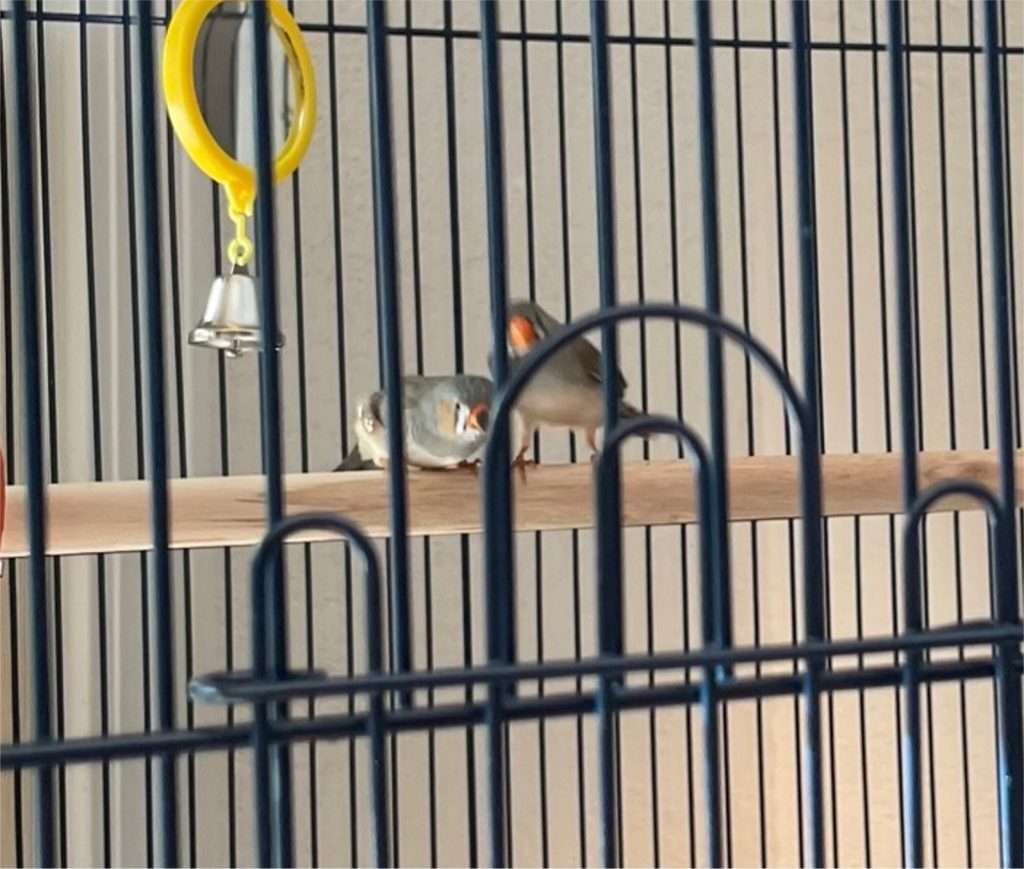 Welcome to Death Blogs, Part 2.  Before we proceed, this blog is not particularly weighty as in the death of Paul Strikwerda’s precious friend & VO colleague Bliss Michelson.  Nor like Billie Jo Konze’s Grandpa.  Nor like our previous cat Simon.  Not even like Michael Apollo Lira’s adorable hedgehog Reginald.

No.  These deaths were each the size of half a hot dog.  I did not eat them.

Beep died suddenly this past Sunday.  And this past Wednesday, just a few days later, her mate, Boop, joined her in The Afterlife.  At this point you are wondering, who are Beep and Boop, and did they star as droids in a galaxy far, far away.

What are Zebra-tail finches?  Well, in my best David Attenborough voice:

Zebra-tail Finches are adorable little avian creatures, the males of which sport a bright orange cheek in order to lure their female counterparts to mate.  Spotted buying expensive drinks as suitors, and asking repeatedly for the female’s phone numbers whilst smacking down male rivals to preserve the bond with their chosen mate, they are an utterly winsome creature.  They are even capable of whiting-out errors in the newspapers that line their cages by projectile bombing them from their feathery anus.

I had previously owned a Zebra-tail Finch as a child. 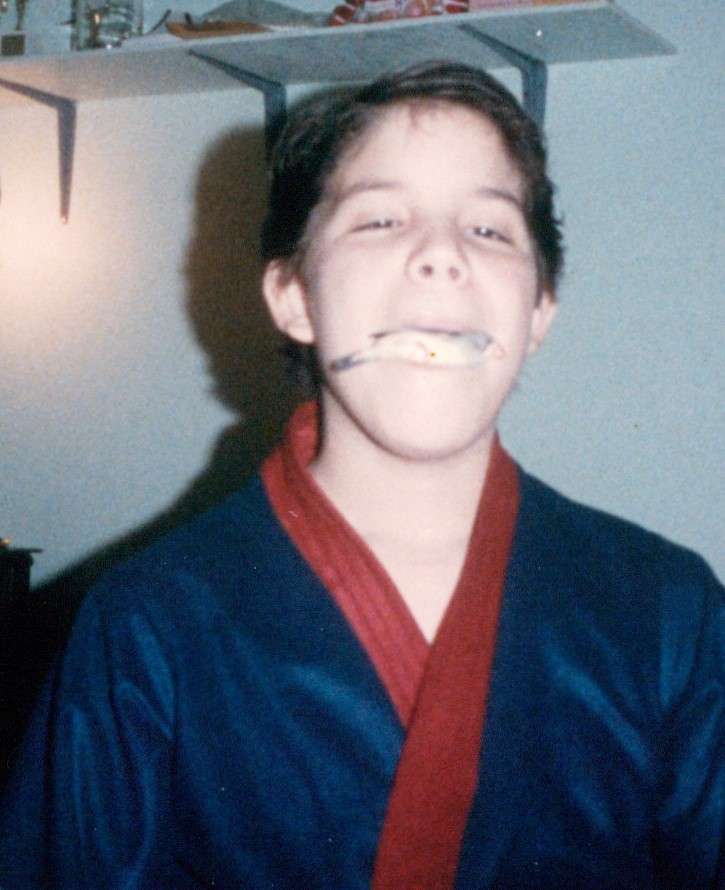 Her name was, you guessed it: Beep.  When I proposed to my 5-year-old that we get birds for him instead of the pet Velociraptor he was asking for, and told him that Daddy had one just like this as a child named Beep (the bird was named Beep; not the child) and that he could have one and name it whateeeeever he liked, that little creative juggernaut engaged all of his artistic prowess and summoned up every ounce of inventive originality he could muster from deep within his soul to form both the longest run-on sentence in the galaxy but also to wow and impress me in naming our bird!

He named her "Beep."

Yep.  And Daddy helped with an accompanying nickname for her male mate, adorning him with the name "Boop."  So…with that…Beep and Boop became official Alexander house pets, joining 9-year-old Labrador Macy who was automatically enrolled, and 1-year-old cat Winston who is a cat and is therefore ineligible for membership.  The latter took great interest in our new acquisitions, climbing slowly up the dining table to perch on one of the chairs and stare at them with unbridled attentiveness while they joyously flipped him the birdie.  I think you see what I did there.

Over the past few months, Beep had developed a small brown spot on her beak.  We did not know what it was, but assumed it was just a beauty mole she was trying on.  While Boop appeared unaffected, none of my family speaks Finch, so we were not privy to any emotional turmoil he may have been experiencing when he looked at his mate and wanted to peck her on the beak but just could not see past that giant blemish.  We believe now that he may have been crying out "Dear God what is that thing?”

When Beep died, I was not emotionally overcome.  I was not sad.  I was somewhat melancholy, sure, like the feeling you get when Red Robin is out of mozzarella sticks. But I was not overly traumatized.  Life, death, round and round, so what?  But over the next few days, as I watched Boop alone in his cage: still…silent…bereft of companionship…slowly pulsating…to see him lose hope and slip slowly into grief….

Nope!  No emotion there either.  Mozzarella sticks.

Later, however, on a subconscious level, their tiny deaths resonated with me enough to compose a blog in keeping with last week’s “one heartbeat away from death” message.  Sure, they were just tiny little blips in this world, but they were beep and boop blips that my son was fond of, and I did have to ask myself why they died.  I have already crossed “Me putting a hex on them for singing too much” off the list, but the questions still lingered.

Was it the cold?  Was it too drafty?  Did they get some kind of avian virus?  Did Stephanie Matto have something smelly to do with this?

Or…was it something I did...or didn’t?  I may never know.  All I know is that I was responsible for the weekly cleaning of their cage.  Brennan was responsible for the daily sifting of their food and replenishment of their water.  However: Brennan, being five, decided they needed about as much monitoring as he gave to the floor of his bedroom, where he strategically positions toys designed to impale me as I walk barefoot across his floor.  Only Brennan knows the secret navigation through the minefield called “Young Boy’s Bedroom.”  I would remind him every morning to “check the birds”; but I should have guessed something would go fowl when he would occasionally respond, “We have birds?” So I will therefore take this opportunity to say that Brennan did it, thus absolving myself of responsibility so that I might go see the new Spider-Man movie unencumbered by a guilty conscience.  Brennan is still at the point where I can successfully blame him, as he cannot read fully or access this blog yet, so I will relish one of the last few opportunities I have to still throw him under the bus.

Nice work, Bren.  Those two tiny Finch corpses in our backyard?  All you, buddy.

In all sincerity, there has been a subtle undercurrent of grief in our house with the loss of these two tiny souls, and this is where I am not kidding.  Death...is unnerving.

I Believe I Can Fly 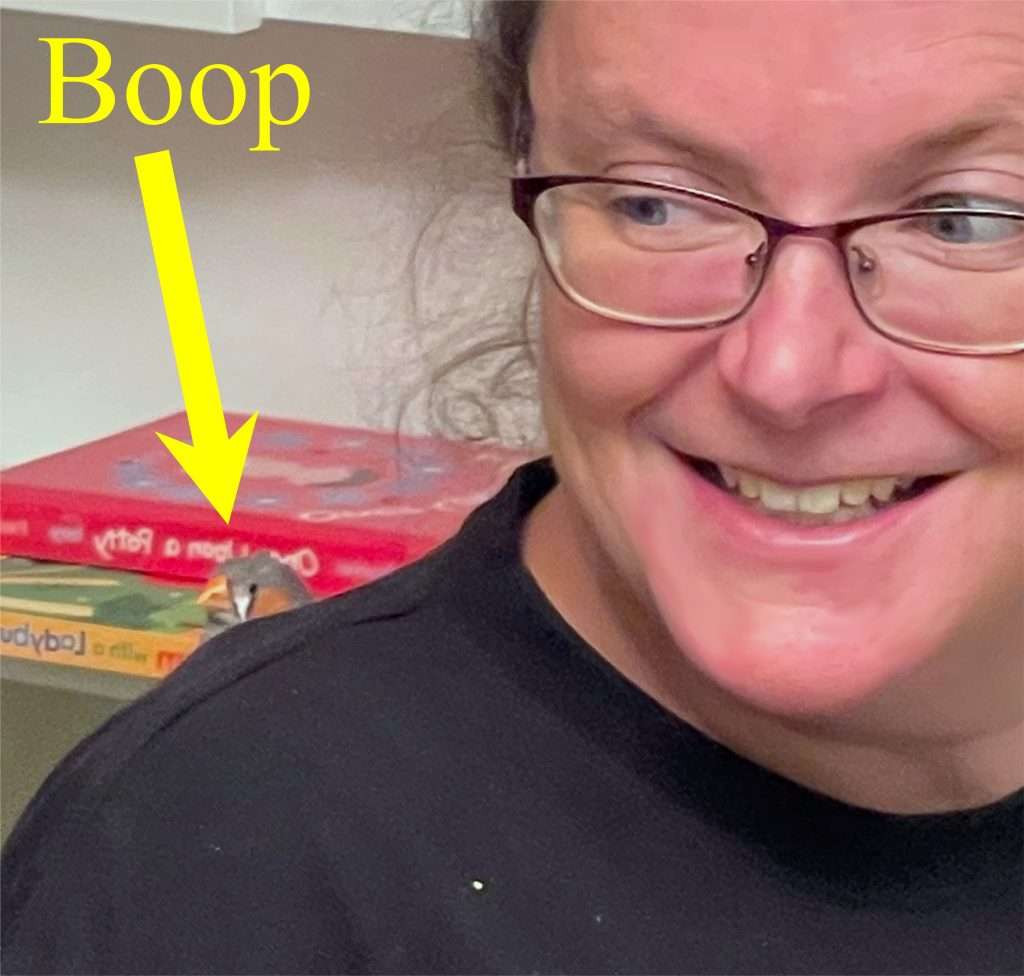 Boop hitching a ride on Mama

Since March 11th 2020, have we not all been in our own crazy little birdcage?

Except when it was nighttime.  When it was nighttime, they would huddle close together on their top bar, insert their beaks down in the fluff of their own chest, and sleep.  Or they would merge into their suspended nest and become one united ball of fluff resembling Fizzgigg from The Dark Crystal, until the dawn light would creep in through the sliding glass door.

Have we not all been birds? At nighttime, do we not draw close to those we love, and try to stay warm until the morning light?  Birds do mate for life...and it is no surprise that when one died, her mate followed her, because he had lost the will to live.  We have all read such moving stories before.  "He chased her, right into heaven."

Now, us as voice talent - we are used to quarantining and social distancing; it is what we do day in and day out.  But we were born to fly free, not quarantined or isolated as we all have been for two long years.

Celine Dion has a song, entitled, simply, “Fly.”  It is a beautiful tribute to her young niece Karine who died at the age of 16.  I love this song.  There are very few songs that move me to tears, save this one and "Hell’s Bells" by AC/DC.  Give this one a listen and see if you feel the same.  O Beep and Boop: fly, fly, little wings.  Fly beyond imagining.  I plan to incorporate this song into the memorial slideshow that I will not be making.  Again, they were just birds.

However, this is now my second straight blog about death.  As Omicron bears down on us, I forbid any of you from dying.  I am about to cry, and we have already used up all our toilet paper to line Beep & Boop’s cage; I would rather not use that to dry my eyes as they made sure to fully decorate it before they departed this world.

Farewell Beep and Boop.  Maybe we will all emerge from our cages soon as well.  I have been a bit of a bird myself these past two years, and I understand.  I am sorry that you flew the coop sooner than expected, but grateful that you’re now most likely mating somewhere in the heavens and whiting out typo's in The Heavenly Times newspaper.  There is less vacuuming of seeds on the floor down here now, and Brennan will hopefully soon stop asking “We had birds?” 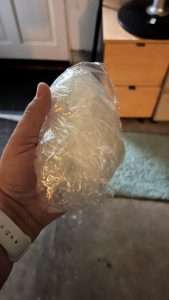 Beep & Boop's Sarcophagus prior to burial. Their little bodies are inside.