DISCLAIMER: This is a satirical blog.  As such, fun is often poked, and exaggerations are often employed.  Please note that I would never publicly disparage or identify a client on my website with whom I had an unpleasant dealing, unless of course I was paid quadrillions of dollars and entered into witness relocation.  Then I would.  My blogs are to provoke thought, to bring an application lesson, and most importantly, to help us all laugh through it.  If a joke comes at someone's expense, so be it.  I think we can all unclench a little - and learn to laugh our way through it.  After all, laughter is still the best medicine. So enjoy the following article as you unclench with me. 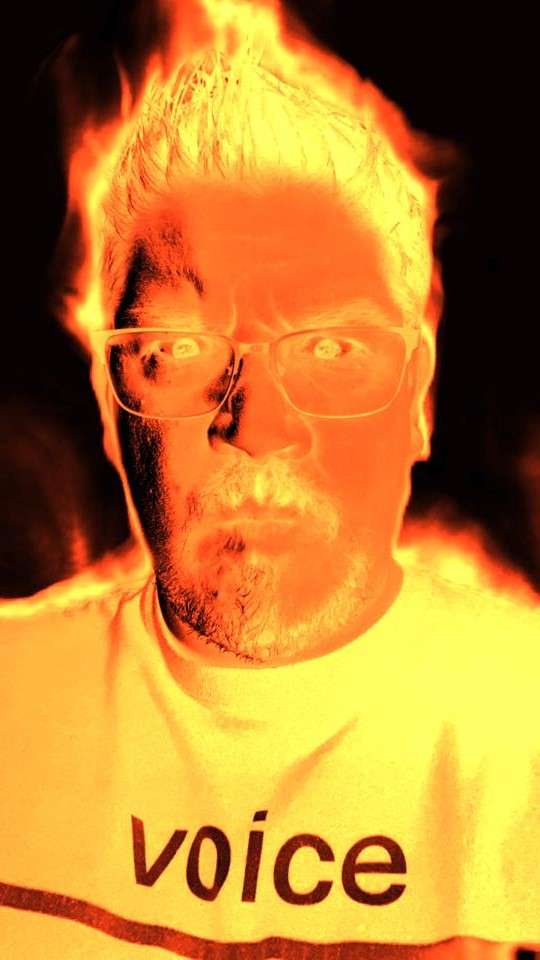 Dear Jon Gardner: Love You With My Life

Perhaps you know Jon Gardner.  Surely you have heard of him.  If not, this is the man singing Love You With My Life on his way home, while you stare, point fingers, and scrunch up your face while you cry from laughter and pee yourself in your car.

But Jon Gardner needs to perform: unmonitored, undirected, freely, and with abandon.

It is this message on freedom that I bring to you today, inspired by Mr. Gardner himself.  Oh, and subscribe to his blog by the way – you will be glad you did.  Also he talks about me frequently on there, which I find acceptable.

However, my message about freedom today does not come in the context of singing.  It comes, appropriately, in the context of voiceovers: specifically, in the context of directed sessions.  We can truly experience freedom and peace even after a directed session goes bad, and clients decide to beat the hell out of a script as our will to live slowly ebbs away and we start to frantically pull on that hangnail until our skin stretches across the room like Saran Wrap and we pray no one around us has a salt shaker because my goodness this sentence has grown tiresome.

You see, I recently experienced what is commonly referred to as Pain.  I do not mean the kind where one mistakenly selects a Sinead O'Conner song from a playlist.  No: I am talking about Directed Sessions From Hell.

I was recently in a Directed Session From Hell wherein I began to despair even of life.  I desperately wanted to flee, but I stuck it out, and even learned a few things.  Namely, that following such sessions, it is critical to decompress, or I will in fact detonate.  Indeed, the healthiest post-session decompression method involves a pint of ice cream (after all "stressed" IS "desserts" spelled backwards), a massage chair, and a murder of crows.  Why a murder of crows?  Well.  If I have a murder of crows, I have:

Mephistopheles at the helm 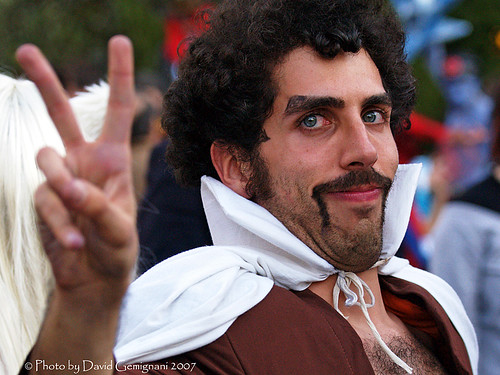 "Mr. Satan" by David Gemignani is licensed under CC BY-NC-ND 2.0

I do not personally know Mephistopheles, aka, Satan, aka, The Prince of Darkness, aka, The Client Who Just Directed Me In That Session.  But I do know this: I have zero desire to return to said fiery nether regions any time soon.  It was too hot, I am currently slathered in Aloe Vera, and my swim trunks no longer fit because of the ice cream.

In my most recent visit to the Underworld, it started well, as they all do.  I went in, as is my wont, assuming that I was about to work with decent human beings, as opposed to Unfeeling Cybernetic Organisms hellbent on my utter pain and eradication, such as my dentist.  In fact, the only thing worse would have been being in that session while having a root canal performed.  I am confident that it would have been difficult to recite wilds of “Is It Safe?” whilst wearing a rubber dam with half of my face as numb as the heart of something cold and unfeeling.  Here I refer to the IRS.

My dentist is actually not hellbent on pain.  He is a rather nice man; he does however send paperwork and annual payments to the IRS, so it is apparent he is connected to them in some shadowy way.

I am highly skilled at similes.  Also my vocabulary is as bad as, like, whatever.

Nonetheless, I was mercilessly forced to deliver SEVENTEEN lines EIGHTEEN different ways each in some cases, which made me employ the use of ITALICIZED ALL CAPS JUST TO CONVEY HOW UTTERLY AWFUL IT WAS.  It was THREE HUNDRED AND SIX reads for a 30-second script.  Overkill?  You bet.  Beating a script to death?  100%.  Making me pray the following prayer?

O Lord.  Ease my suffering in this my moment of great despair.

Lord, my enemies hath encamped around me.  They do direct me mercilessly.

Rain down hot fire upon them, O Lord, in thy just mercy.

May the plague of a thousand fire ants crawl up their pantlegs, and

May they be wearing pants that are hard to take off to mitigate thy fire ant plague, O My Just and Avenging Lord Who Created Nature Including Fire Ants And Can Do This.

They micromanaged and nitpicked.  My heart was pounding and I was sweating.  They beat the script to death and overdirected.  49 minutes for a 30 second script.  My only regret was not bringing in something that I could squeeze until it popped.

I left shaking, wondering if there were some sins I had failed to renounce that have been piling up as debits against my go-easy-on-me pile.

Be all that as it may, there is one thing that I learned after this recent session.  I am sorely lacking in patience.  Oh!  Also that I can hate people and repent right after. 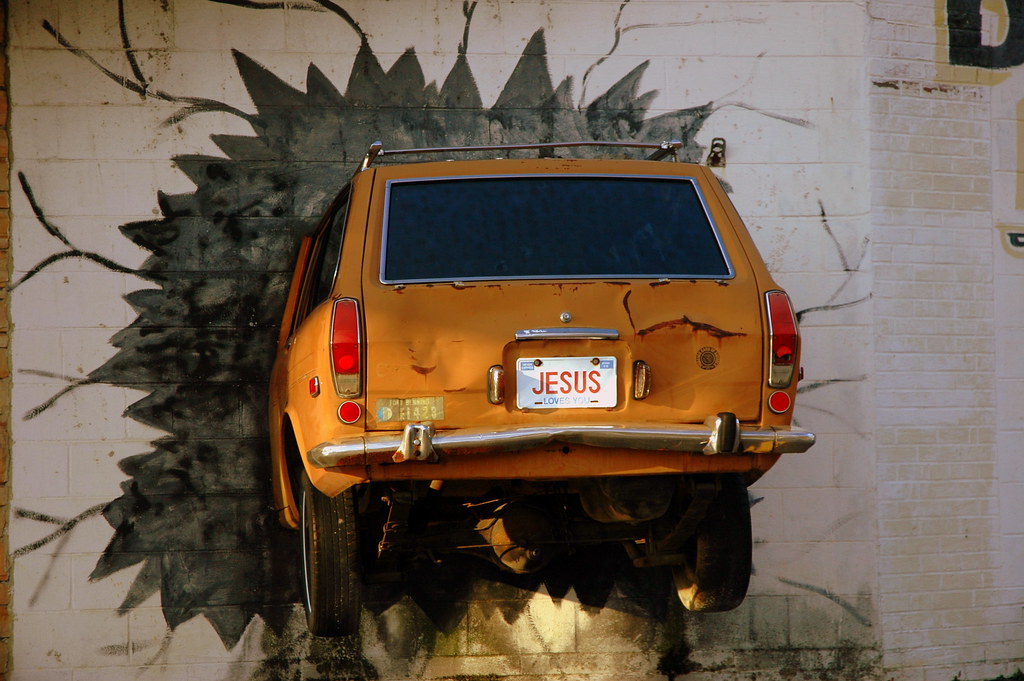 "Jesus take the wheel." by Whitney GH is licensed under CC BY-NC-SA 2.0

As a Voiceover Artist, and a Christian who is talented at muttering swear words under my breath at people who bug me because the love of Christ runneth over in me, I would much prefer Jesus Himself was directing me in my sessions rather than them.  The session would be holier, I would have a chance to repent, and we could go for a nice stroll across the lake afterwards to that nice place on the other side that serves bread and wine.

However, after Googling, I discovered that Jesus is not in the business of producing videos that require voiceovers.  I must therefore settle for a mortal.  And as such, I must be patient.

Realizing that absolutely no one is perfect except Sigourney Weaver in Aliens, I must relegate myself to better preparing for such things.  On more than a few occasions in that session, I wanted to pretend there was technical interference so that I could gracefully bow out, and communicate incessant and comical apologies about the unpredictability of the internet, and we would all have a mutual sitcom laugh together as I intentionally stalled the rescheduling of the session until the year of our Lord 5142.  I would lose out on the payment, but I would regain my peace and sanity, and be able to have ice cream earlier.

A saint I am not.  My wife can confirm this.  So can my children.  And my dog.  And waiters.

I am full of imperfections, impatience, and a desire to strangle difficult people.  But I guess in the end, it was a victory.  I took deep breaths.  I asked for needed breaks in the middle of the session in order to regain composure.  I did not run screaming from my studio.  I did not mail them harassing letters made of construction paper and human hair.  No one was called a dumb doodyhead. I delivered, though I did not want to.  That is truly something.  I employed the minimal patience within me, because, truly, the only way out is through.  They got what they needed, and we can all look back on this crazy event, laugh heartily, and smile at the craziness that was The Directed Session from Hell, celebrating freedom from one another.

Now if you will excuse me - Love You With My Life is about to come on the radio, and I need to finish wrapping this human hair around this construction paper harassment letter so I can sing along with Jon.  How do you spell Doodyhead?