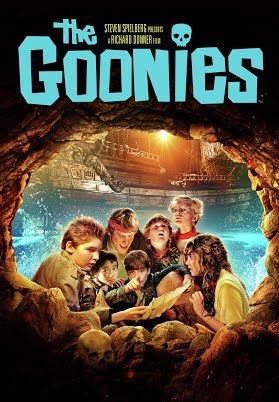 Unless of course, you, uh, actually die...

We all know that sinking feeling.  Ever play Super Mario Bros?  Pac-Man?  Space Invaders?  Frogger?  Other games from the 80’s because I have no idea what the cool games are now?  Seriously, it’s the truth.  I am no longer familiar with what falls under the “cool” column.  Once, ages past, when puppies were the oldest animals, I was sure of myself, and the word “cool” conjured up all kinds of things that were universally acceptable.  Now, the only universally acceptable thing I can conjure up is The Goonies.  Oh snap – that’s from the 80’s too.

Speaking of the 80’s.  Wave hair.  Gotcha pants.  Tie-dyes.  Lionel Richie’s “All Night Long.”  The Material Girl.  Prince-who-eventually-became-the-symbol-that-no-one-could-pronounce-so-we-all-just-said-whatever-and-still-called-him-Prince.  The ORIGINAL Battlestar Galactica.  The ORIGINAL “V” Miniseries.  The ORIGINAL Beaches.  The ORIGINAL Poltergeist.  The ORIGINAL Pet Sematary.  E.T..  All the games mentioned above.  “New” Coke, which was essentially Old Coke soaked in desperation.  And of course, the ORIGINAL Transformers. (All hail Megatron.) Remember when life was good?  I do.  The only super concerning thing then was engaging in full thermonuclear war with Mikhail Gorbachev’s forehead birthmark. For the record, I think we could’ve taken him/it.

“I tried so hard, and got so far, but in the end, it doesn’t even matter…”

We’ve all played those games and gotten up to Level 238 where we were set to face off against the Sinister, Nasty, Fire-Breathing Ooga-Booga-Dragonlord, and we bit the dust.  We could only bury our face in our hands and weep bitterly as the wind was sucked right out of us.  We were crushed – if only for a moment – because then we saw it, as but a glimpse through our fingers.  Light streamed down through the clouds as we realized with blessed hope that the gods saw fit to grace that blessed Atari controller with that magical button that would stop time…hold us mesmerized…breathe blessed life into our wills again…and start us back at one, restore our energy meter to full, allow us to respawn in a new place, and begin the quest anew.

What was it, you ask?

Sean Astin became galaxially (it’s a word) famous (so is that) after uttering those four words in Steven Spielberg’s classic. The way I see it, there are two truths in that phrase:

Either way, death is not an option, or at the very least, it’s not to be spoken.  So how does this apply to voiceover artists?

Gimme a minute… I’ll think of something…

AH!  I have it!  Voiceover Artists never say Die!

Phew.  Dodged a bullet there!  Which could of course make me di-  uh….perish.  (Phew!  Dodged another one).

Even when you’re down and out and no auditions are coming in, and no agents are signing you, and no jobs are being awarded you, you, valiant knight, can reset.  You just have to mount back up on that flying ostrich, and Joust your way back into total Voiceover world domination!  It’s always a matter of just-keep-playing.  As long as you have enough quarters, that is.

The Goonies represent the best of adventure, youth, tenacity, and belief.  When I was a boy, my dad affectionately used to call me “Goona.”  I don’t know why, because he made up a lot of strange and bizarre coinages that only increased in weirdness as I began my slow march into adolescence.  But I can’t shake the inescapable feeling that he was really, all along, unbeknownst to me, intentionally mispronouncing it.  He was really calling me a Goonie, and pronouncing adventure blessings over me.  The alternative being that he is of course certifiably insane; but then again, to all adolescents, all dads are.

You’re a Voiceover Artist.  You’re made of stern stuff, do you know that?  You’ve willingly, intentionally, deliberately chosen a career fraught with risk of failure.  People bounce in and out of this industry all the time, over with and burnt out quicker than Britney Spears & Jason Alexander’s marriage.

A lesser person would choose to play basketball for a career.  Or be a doctor.  Or run for president (I’m not implying anything with that one).  But nooooooooooo….you went and chose something that is destined to kill you.  To make you di-…um….perish.  What is that career?

It’s a career that will destroy your hope, pillage your confidence, lay waste to your ambitions, steal your thunder, ransack your dreams, annihilate your goals, pummel your confidence, besiege your best-laid-plans, thrash your desires, slaughter your objectives, assassinate your aspirations, pull the carpet out from underneath you, leave you frustrated and kick you out of an airplane bereft of anything remotely resembling a parachute.  It’s a vocation that can starve you for work, famish you for provision, and deprive you of income.

After all, who wants to play basketball when you can get elbowed in the face just going in for a layup?  Who wants to perform heart surgery when you can sew the patient up and forget that you left the scalpel inside them and then be presented with a lovely malpractice suit?  Who wants to run for president when no one likes you no matter what you do, and your approval ratings sink lower than a thimble doing the limbo under a rug?

No.  You, in all your wisdom, have opted to pursue a career where you may in fact di-….um…keel over from being overcome with….absolute pleasure.  Pleasure in:

Let’s face it.  You’re a Voiceover Artist.  So you, by extension, are a Goonie.

Goonies never say Die.  You, my friend, are a Goonie.  You’re an Adventurer.  A cave-traveler.  A ship-rider.  A treasure-collector.  A gold-hunter.  A world explorer.  A buccaneer.  A swashbuckler.  A trailblazer.  You get to escape Mama Fratelli and her henchmen!  You’re lucky enough to meet Sloth!  You are bestowed the rich privilege of cavorting with that fantastic adolescent inventor, Data.  You – yes, YOU! – get to be a Voiceover Goonie and go on the adventure of a lifetime!

You’re in for perpetual survival.  And there are countless tools made available to you online should you boldly and courageously choose to be a Voiceover Goonie.  Facebook groups.  Reddit forums.  LinkedIn communities.  Meetup groups.  Water cooler chats, and even Quora for asking questions. It’s an adventure for sure, and to help you along your way, you, just like Mikey, have a supporting cast of characters ready to help you along your way and ensure that you survive:

The di-…uh….lot has been cast. And You’ve. Been. Chosen.  Fare thee well, my brave Voiceover Goonie!  Go with good fortune, and may the wind be at your back!  Good fortune awaits you!

Ah, snap.  My Pac-Man just di-…uh…perished.  Can you spare a quarter?